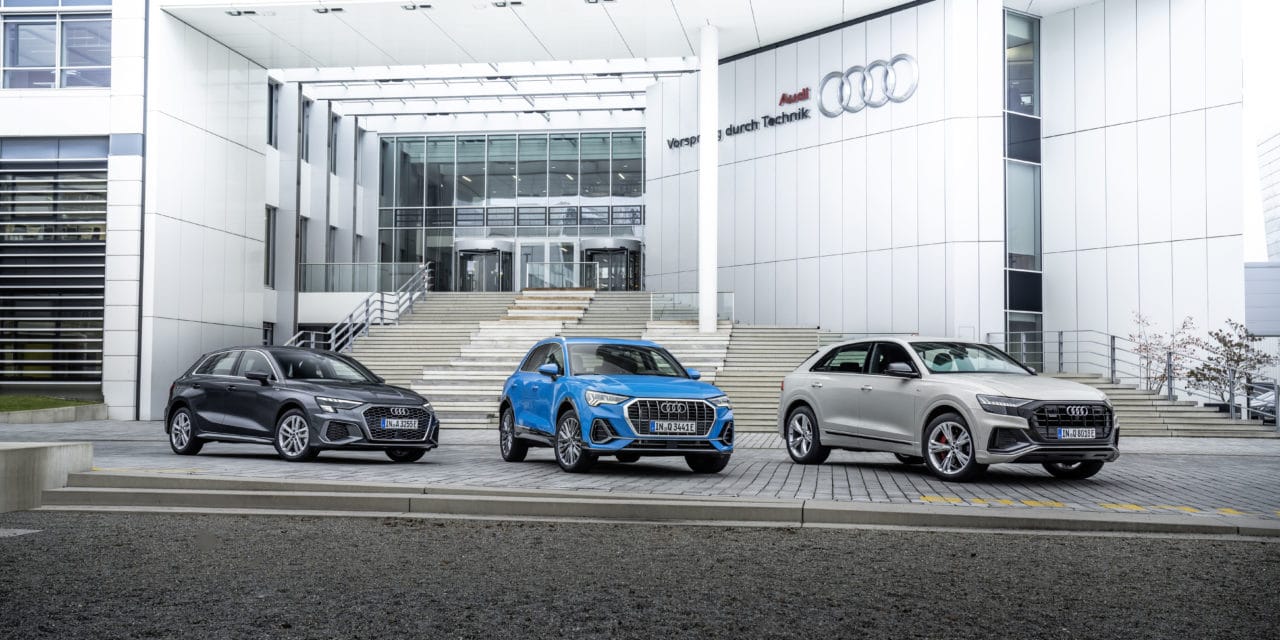 Audi is rapidly expanding its range of plug-in hybrid models (PHEVs). The latest models of the A3 Sportback, Q3, and Q3 Sportback, as well as the Q8 complement the portfolio in the compact segment and full-size class. Their common strengths are a confident driving experience, straightforward charging management, and great everyday usability. These three strengths make up the fundamental target triangle in the development work for the plug-in hybrid models at Audi.

The first aspect of the target triangle in the development work for the PHEV models stands for a confident driving experience. The drive concept of the PHEVs provides great efficiency and high recuperation power. As a result, a large portion of everyday journeys can be covered on purely electric power and with zero local emissions. At low speeds, what is known as the Acoustic Vehicle Alert System generates the legally prescribed e‑sound.

In “Auto Hybrid” mode, which is the main operating mode, the TFSI and the electric motor divide up the work intelligently and with maximum efficiency, using fully electric power at low speeds, predominantly the TFSI engine at higher speeds, and often a combination of the two. The electric motor provides support when accelerating or wherever there is a high load requirement. When the driver depresses the accelerator firmly, the interplay between the electric motor and the gasoline engine creates a powerful boost. When accelerating from low rotational speeds, for example, the electric motor bridges the tenths of a second that the turbocharger needs to build up pressure. When driving at consistent rotational speeds, it sometimes functions as an alternator, thereby shifting the load point of the TFSI to operating ranges with higher efficiency.

The predictive operating strategy helps with consumption reduction and recuperation in driving operation. In hybrid mode and when route guidance is activated, it controls the powertrain in such a way that the battery charge is distributed intelligently across the entire driving route. It evaluates data from the navigation system, sensors, and assist systems continuously. The predictive operating strategy takes real-time events such as traffic jams or dense city traffic into account and adapts its calculations to the driver’s style. Based on this information, it calculates a rough plan for the journey.

At the same time, it prepares a fine plan for short distances, working together closely with the predictive efficiency assist (PEA). The PEA uses the data of the on-board sensors to identify upcoming town signs, intersections, speed limits, and vehicles driving in front.

As soon as the driver takes their foot off the accelerator pedal, the hybrid management system and the predictive efficiency assist jointly decide between the two possibilities of letting the models coast with deactivated drive or decelerating them – like in the case of the A3 and Q8 – via the electric motor and recuperating. When the automatic transmission is in S gear, all models go into distinctive coasting recuperation.

The electric motor performs brake operations up to around 0.3 g alone – i.e. the vast majority of decelerations in everyday driving – and recovers energy. Only when the driver depresses the brake pedal more heavily do the hydraulic wheel brakes come into play as well, activated by an electric brake booster. The transition is almost unnoticeable and is referred to as brake blending. The brake pedal always provides excellent feedback and can be modulated precisely. Recuperation remains active. While braking, the A3 TFSI e and the Q3 TFSI e recover up to 40 kW of energy; the Q8 TFSI e quattro recovers up to 80 kW.

Special displays inform the driver about the activity of the drive. Aside from the current system output being demanded, the digital instrument cluster displays the Audi drive select mode and drive mode, as well as the state of charge of the battery. It also shows the electric range and total range. The central MMI display visualizes the flow of energy as well as the portion of the distance driven using the combustion engine and the electric motor.

Convenient charging management at home and on the road

The second aspect of the target triangle of Audi development is charging management. The PHEVs in the compact class charge with 2.9 kW and 3.6 kW, respectively, while the medium-size class and full-size class models charge with up to 7.4 kW. For example, it takes between two-and-a-half and four-and-a-half hours to charge the battery using an industrial power socket. Due to their greater electric consumption, the larger classes have a bigger battery and consequently a higher charging capacity.

Most PHEV customers charge their vehicles once or twice a day, usually in their own garage in the evenings or at work. If desired, they can use certified Volkswagen Naturstrom at home, which is generated from 100-percent-renewable energy sources.

According to a study conducted by the German Federal Ministry of Transport and Digital Infrastructure, 95 percent of all private journeys in Germany are less than 50 kilometers (31.1 mi) long, and 99 percent are less than 100 kilometers (62.1 mi) long. This means that the Audi plug-in hybrid models cover the common customer profile. The Q8 55 TFSI e2covers up to 59 kilometers (36.7 mi) on fully electric power in the NEDC, and the Q3 and Q3 Sportback 45 TFSI e3 cover up to 61 kilometers (37.9 mi). The compact A3 Sportback 40 TFSI e4 can drive up to 78 kilometers (48.5 mi) with zero local emissions.

The e-tron Charging Service from Audi ensures convenient charging while on the road. With just one card, it grants access to around 155,000 AC charging points in 26 European countries. All plug-in hybrid models from Audi come with two cables as standard: the compact charging system with a cable for domestic and industrial power sockets and a mode 3 cable with a type 2 plug for public charging terminals.

The myAudi app makes everyday life even more convenient by allowing customers to use the Audi connect services on their smartphones. Customers can check the battery and range status remotely, start charging processes, program the charge timer, and access the charge and consumption statistics. The app and the car display the charging stations at the current location as well as the destination. The app can also be used to heat or cool the car before setting off. Customers can preserve the vehicle’s electric range by using electricity from an electric outlet for this. Depending on the how they are equipped, they can also activate heating of the steering wheel, seats, mirror, windshield, and rear window as well as the seat ventilation via the pre-entry climate control.

The third aspect in the target triangle is everyday usability. This initially arises from the first two matters of frequent electric operation and straightforward charging management. However, a decent amount of space for passengers and luggage as well as a high level of variability for everyday and leisure-related tasks are equally important. The lithium-ion battery of the plug-in hybrid models features a space-saving and compact design and is integrated in the vehicle structure. Its installation position is based on the technology platform: In the PHEVs with a longitudinally mounted engine (MLB), it is located below the luggage compartment. In the models with a transverse engine (MQB), it is positioned in front of the rear axle, and the fuel tank is located below the trunk. Although the loading floor is raised slightly as compared to the conventional models, it does not feature a step. This creates an even surface with no restrictions when it comes to loading the vehicle. A trailer hitch – usually with the same towing capacity as the conventional counterpart – is continuously available, with the exception of the A8 TFSI e.

Suitable for every model: the technology components

The electric motor is a permanently excited synchronous machine (PSM) that outputs between 80 and 100 kW depending on the model. It is integrated in the housing of the automatic transmission, where it forms what is known as the hybrid module together with the separating clutch, which connects the TFSI engine with the drivetrain. An electric oil pump in the automatic transmission ensures oil supply and therefore gear changes even when the TFSI is deactivated.

In terms of power transmission, the plug-in hybrids demonstrate the technological bandwidth of Audi. In the compact models, a six-speed S tronic sends the drive force to the front wheels. The full-size and luxury class models, which have longitudinally mounted engines, are equipped with either a seven-speed S tronic or an eight-speed tiptronic, and quattro drive comes as standard. The A6 and A7 Sportback feature the quattro with ultra technology, i.e. automatically engaging rear-axle drive. The A8, Q7, and Q8 have a permanent quattro drive with a purely mechanical center differential.

Depending on the model, the lithium-ion battery stores between 13.0 and 17.9 kWh of energy. In the compact models and the Q8 TFSI e quattro, it integrates prismatic cells in a fixed housing. The cooling circuit of the battery is connected to the low-temperature circuit, which supplies the electric motor and the power electronics. This improves the efficiency of the electric motor and ensures longer battery availability at high loads and high outside temperatures.

Up to seven driving profiles: Audi drive select as standard

The Audi drive select system comes as standard in all PHEVs with the four rings. Depending on the model, it offers up to seven driving profiles that the driver can select in the MMI system: comfort, efficiency, auto, dynamic, individual, offroad, and allroad. Audi drive select influences the setup of the drive, automatic transmission, steering, and suspension, as well as various optional systems, such as the air suspension. Depending on the setting, the interaction between the systems also changes, for example the thresholds from which both drives work together or the electric motor supplies the boost and thus the maximum torque.

Attractive: subsidy for the technology

In addition to all these technological strengths, these models are also made economically attractive to customers in Germany. When purchasing a new car, they are entitled to a subsidy of EUR 5,625 or EUR 6,750 (depending on the base price) for most models. As company cars, the PHEVs are taxed at a flat rate of 0.5% of the gross list price. 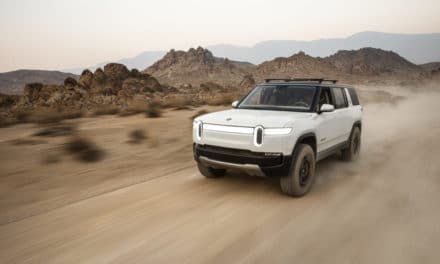 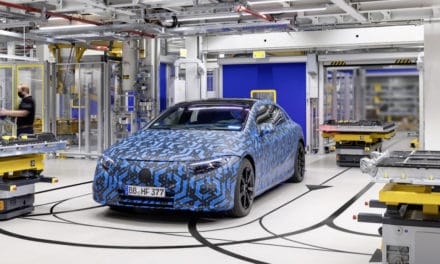 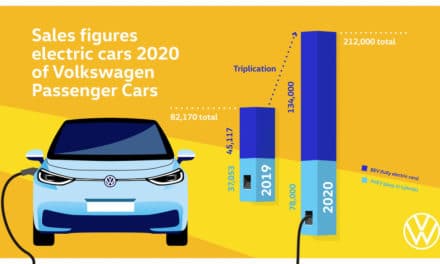 Volkswagen Triples Deliveries of EVs in 2020 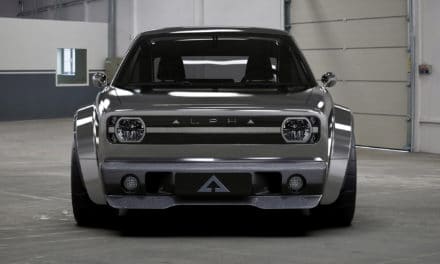