Demonstrating success on electric vehicle development in the past year

Upholding the company’s vision of “3+3=∞” which symbolizes the infinite possibilities created by the group’s industrial advancement and emerging technologies, this year’s Tech Day focused on four core themes: Passion, Technology, Software and Experience. As the HHTD21 event kicked off, Young Liu, Chairman of Hon Hai Technology Group, introduced three autonomously developed electric vehicle models to media and guests that had tuned into the livestream. Lilian Chen, CEO of Yulon Motor Group, appeared alongside a Model C electric vehicle together with Shen Jong-chin, Vice Premier of the Executive Yuan, who was present to deliver the keynote speech. Terry Gou, Founder of Hon Hai, made a surprise appearance by driving out in a Model E electric car.

This year’s HHTD was organized on the Founder’s birthday. Terry Gou has always believed that the adoption of electric vehicles would inevitably be a global trend by the simple fact that it has become the world’s largest and most expensive smart electronic device. He believes that with the strong capabilities in electronic manufacturing, including semiconductors, modules, precision machinery and operation, Taiwan can play a key role in the development of electric vehicles. He expressed that the Model E electric car was the best birthday present for him, which is why he insisted on driving it himself.

Lilian Yen Chen, CEO of Yulon Motor Group said that within less than a year since its establishment, Foxtron, the joint venture between Hon Hai and Yulon Motor, has today successfully demonstrated Hon Hai’s strong capability and speed of delivery as well as Taiwan’s decades-long history of research and development expertise. Today’s showcase demonstrated future products with high performance. Yulon Group’s Luxgen and CMC proprietary brands will be the first key partners to adopt Foxtron’s product platform. She believes with the determination and support from Hon Hai, Foxtron will play a key role in the transformation of the automobile industry, leading the advancement of the automobile production value chain in Taiwan.

Young Liu, Chairman of Hon Hai Technology Group, said that Hon Hai had announced its electric vehicle strategy during last year’s Tech Day, and throughout the year, the company had announced, on average, one partnership announcement per month, creating a Hon Hai electric vehicle supply chain and distribution network while demonstrating its achievements in hardware development. In the next two years, Hon Hai will bring to the industry more updates from its software and semiconductor businesses to allow the development of easy-to-use, highly efficient and high-performance electric vehicles – “Hon Hai is ready and no longer the new kid in town” he said.

The Model C is the first model built on Foxconn’s electric vehicle open platform and is positioned as the intrinsically optimized electric SUV with pure electric nature. The Model C’s four core features are: shape, space, power and energy consumption. Its design does not only have a minimalist appearance, but it has also significantly minimized the spaces used for mechanical components, while maximizing seating space. The Model C, which is 4.64 meters long with a wheelbase of 2.86 meters, offers comfortable seating for 5+2 people and plenty of storage space, making it easy to navigate crowded metro areas while still enjoying the luxury of a larger car.

The Model C, with a low 0.27 drag coefficient, accelerates from 0 to 100 km in 3.8 seconds and delivers an extended range of 700km. Thanks to the open platform sharing advantages, consumers can have a pure electric SUV with high performance, high efficiency, high intelligence, low energy consumption and large space at a reasonable price comparable to a fuel-powered car.

The Model E, jointly developed by Hon Hai and Italian design firm Pininfarina, is a technologically innovative luxury flagship sedan that can meet the needs of middle and high-end consumers. At the same time, it is also the high-quality first choice for businesses. The rear seat space can transform into a dedicated mobile office, with personal mobile devices seamlessly connected to the passenger car, enabling a series of smart applications such as face recognition door opening, smart windows and vehicle and environment interfaces.

In addition to luxury and comfort, the Model E, with high performance and advanced dynamic control technology, delivers a power output of about 750 horsepower and achieves 0 to 100 km acceleration in a staggering 2.8 seconds, better than comparable models in the market and almost at the pace of a Formula One racing car. The Model E also has a 750km range to address the range anxiety of most electric car users.

Positioned as an intelligent transportation solution, the Model T is a stylish urban bus. Its high rigid body design and protection meets the Federal Transit Administration (FTA) regulations and standards. In addition, the Model T has completed 200,000km of acceleration endurance test and more than 1,000 hours of rigid strength tests at the Automotive Research & Testing Center (ARTC) Testing, ensuring the safety of drivers and passengers alike.

In terms of energy consumption and endurance, the Model T’s battery can withstand temperatures of up to 400 degrees, across a range of more than 400 kilometers. Under full load conditions, the maximum climbing capacity can reach 25%, and the maximum speed can reach 120 kilometers per hour, providing drivers with a relaxed and smooth driving experience, whilst allowing passengers a comfortable and safe journey.

Chi-Sen Tso, Vice Chairman of Foxtron, concluded the morning session of the HHTD21 and expressed that in the past year, Hon Hai had made significant achievements in electric vehicle development that included strategic partnership alliances, critical technology research and development as well as the expansion of a global production network. In the coming five years, in line with its strategic vision, the establishment of the global network together with the accumulated knowledge, electric vehicle will become another Hon Hai trillion (TWD) dollar business.

Foxconn will soon be able to share the progression of its 3+3 vision and provide more details around new initiatives such as the launch of a software smart gateway, smart cockpit and smart driving, transforming itself into a software-driven enterprise for the future. 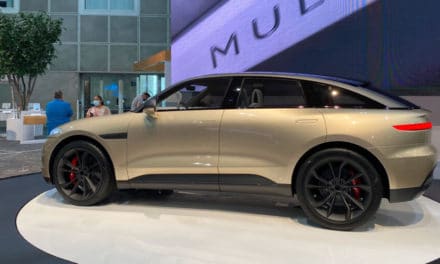 Mullen to Offer Test Drives While Touring the U.S.